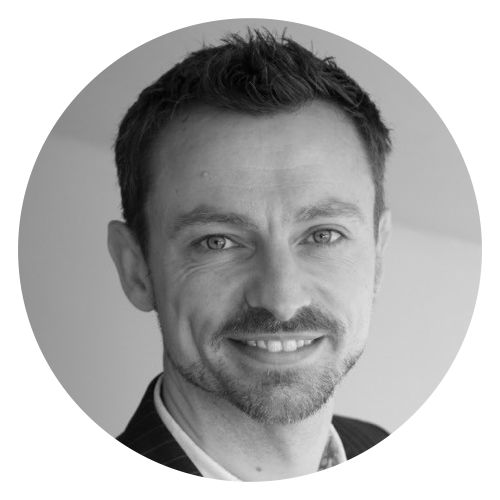 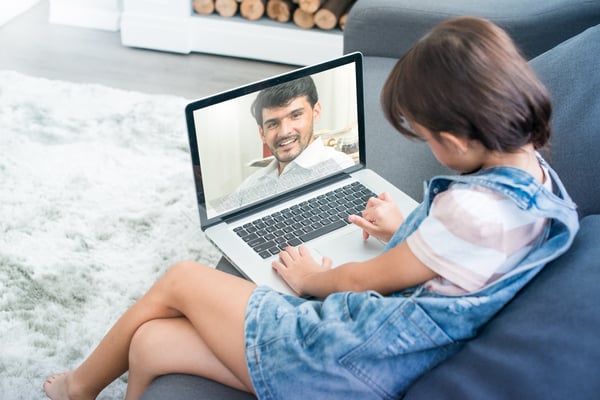 It goes without saying that we are in unprecedented times. The disruption to our lives and business that COVID-19 has caused is something very few of us have had to deal with before, and that is challenging many of the standard practices that marketers have used for years. So how should businesses respond?

We’ve discussed in previous posts and events that a brand purpose can be a powerful force for both wider good and for business, if it is authentic, and if businesses follow through. The current crisis is undeniably a moment for businesses to show that their values and mission statements mean something tangible, rather than simply grand words to garnish a brand with superficial meaning. Recent work we have conducted with consumers, and projects we have collaborated on with our partners such as Kantar, provide some clarity about consumer expectations about brands during the crisis, and how they are responding emotionally to brand communication in the current climate.

What should businesses be doing?

Help if You Can

Clearly, if you can help, you should. This is an ethical imperative, but also a clear expectation from consumers. Results from Kantar’s COVID-19 Barometer research on people’ attitudes to the crisis show that 3 of their top 5 priorities relate to businesses making a difference. This can be wholescale change based on a business’ core skill set, such as F1 or car manufacturers converting production facilities to make respirators or face masks; or can be simpler help that assists people in their day to day lives, such as retailers implementing social distancing strategies.  This includes some more creative approaches, such as pricing strategies on multiple purchases that discourage stockpiling, or donating part of proceeds to charities, or extending credit lines for those whose livelihoods are affected by the pandemic. 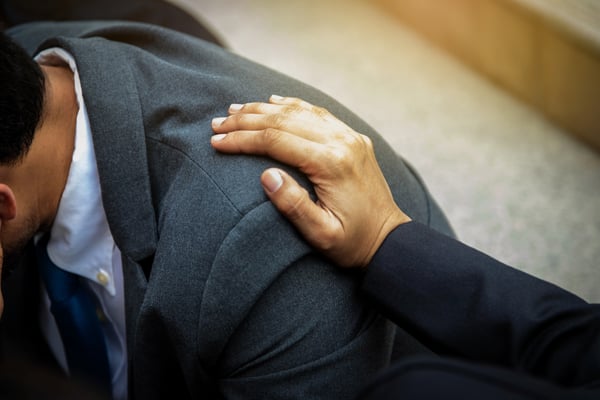 Look After Your Staff

Clearly not all businesses can do something so direct, though. So if you can’t help directly, then at least look after your staff. Kantar’s COVID-19 barometer makes it clear that consumers expect businesses to minimize impact on their employees and keep them safe, but also in a job wherever possible–in fact the top 2 expectations of businesses expressed by consumers related to employee welfare. Businesses that retain their staff will clearly be better placed when the crisis passes, but also will be more likely to be positively viewed by their customers than businesses that make a grand public gesture while simultaneously laying off staff.

Do Not Exploit the Crisis

That links to the third concern expressed by consumers – that businesses should not seek to exploit the crisis for their own ends.  It is perhaps for this reason that an Middle Eastern financial services brand faced a social media backlash against a recent ad campaign, which explicitly linked the use of cash with the transmission of the virus, and contrasted that with the benefits of its contactless card.  While many consumers may feel more comfortable avoiding cash, drawing such an explicit comparison is perhaps seen as preying on people’s fears and unacceptable in this climate.

However, avoiding exploitation doesn’t mean don’t advertise at all. People acknowledge that businesses need to be there when we are the other side of this, and so express little appetite for all advertising to stop (in Kantar’s research only 8% say brands should stop advertising). People understand that advertising is part of business, and that stopping entirely may harm companies in the long-term, which is bad for employees and the economy, and it is also true that advertising is seen as a little piece of normality in a difficult climate.

Should brands advertise in the current climate?

If your business is in a financial position to do so, then you should. Data from previous crises suggests that it is the brands that maintain their support, and so reinforce their brand meaning and salience, that recover fastest. But clearly brands need to do this sensitively and after careful consideration of the approach.

What sort of advertising do people respond most positively to right now?

If brands chose to make reference to the crisis, then creative approaches that show authentic empathy with the customer seem to be resonating powerfully–showing an appreciation of the difficulties in everyday life that most people face, and how the brand can help ease that, are well received. Campaigns such as UK retailer Tesco’s recent spot, show exactly that which is a clear exposition of the measures the retailer is taking to both keep customers and staff safe, while still providing an essential service. More vague messages of collective hope and stoicism are seen as positive but generate less overall impact for the brand. Realism also seems to be important: for instance a recent ad for a technology client which celebrated the benefits of connecting virtually, with polished visuals of families connecting and little acknowledgement of the difficulties virtual living creates received a more muted response than you might expect. Similar ads from other providers with a more home-made feel and a more realistic tone seem, subjectively at least, to resonate better.

However, a key point for advertisers is this–you don’t have to directly reference the crisis for advertising to be successful. If your brand doesn’t directly help or isn’t directly impacted by the crisis, you don’t have to force it. Our data is very clear–people remain receptive to existing campaigns, even if it’s not referencing the crisis, so campaigns that were successful previously will likely remain so. For instance, our emotional response data showed viewers responded in the same, positive way to an ad for a US cleaning brand, when it was researched during the crisis as they did when it was originally researched prior to it.

Likewise, advertisers don’t have to avoid creative approaches that show activities that are currently limited, so long as it is not the point of the story.  So while KFC’s “finger-licking” ad was quite understandably pulled for focusing on currently unsafe behavior, we have found many other campaigns that feature restricted activity as part of the narrative still generate positive results. People can suspend disbelief when watching ads, and COVID-19 is not always top of mind when they are engaging with video. So for instance, a French ad for Canal+, which centred on a spoof Mission-impossible scenario with the cast as elderly people, generated the same, very positive levels of emotional engagement when researched during the lockdown as when it was originally researched  prior to the crisis. We have also seen ads featuring other proscribed situations, such as socialising, outdoor events, sporting venues still generating the same positive responses when viewed during the crisis as they were beforehand. 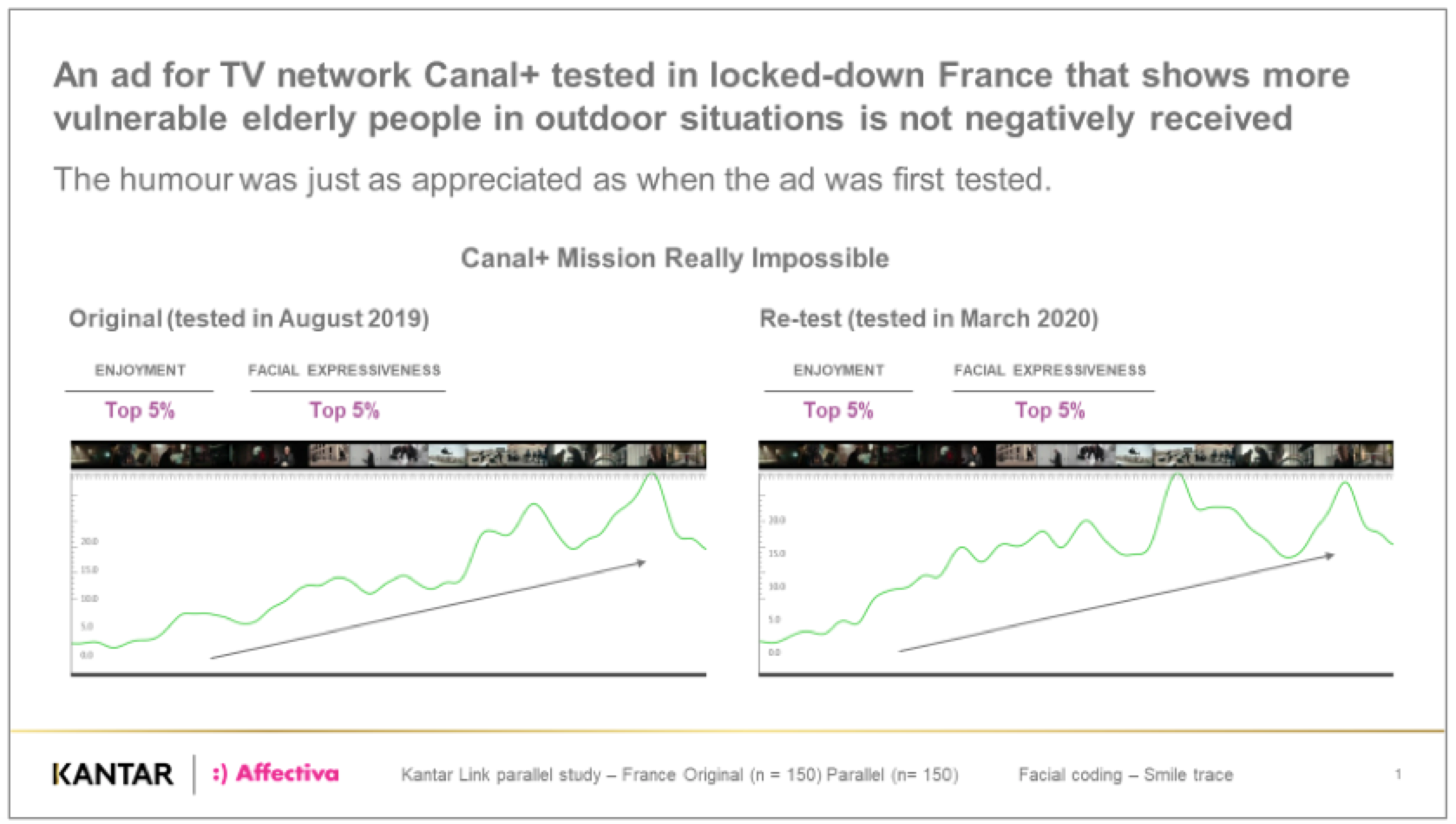 Many marketers are worried about striking a frivolous tone in the face of the crisis, but while we need to be sensitive, and consider now a joke may be interpreted now, we don’t have to  take a serious approach, especially if not talking about the crisis explicitly. In fact, positivity and humor are welcomed by many as little light relief from the current situation. So, for instance, an ad for Busch beer (that features people meeting outdoors ) generated the same positive responses now as it did when originally researched.

In fact, we have clear evidence, looking across the huge global dataset of ads we research (almost 50,000 to date, in 90 countries across hundreds of product categories) that people are not responding more negatively to ads overall during the crisis  compared to beforehand. The average levels of smiles we observe remain the same, and the average levels of negative emotions have not risen either. So while the crisis is clearly adding a lot of stress to people’s lives around the world, this may not be fundamentally changing the way they engage with marketing narratives–which is perhaps understandable given the relatively trivial role advertising plays in people’s lives.

The COVID-19 crisis is a real moment for everyone to step up and make a difference, and businesses are no exception. If your brand mission is to make the work a better place, now is the time to follow through and do so, and brands that do will not just make a difference now, but benefit from it long term.

However, that doesn’t mean changing everything. Pulling all marketing spend carries risk, to a business and its employees, and is not necessarily expected by consumers. Viewers are not fundamentally changing the way they respond to marketing, so brands can still advertise, and a tone of authentic empathy seems to be powerfully resonant. But brands don’t have to change campaigns, or avoid proscribed behavior, or avoid humor. These are challenging times, but strong brands can survive it, and even if your business can’t make a direct difference to the crisis, a little bit of normality is appreciated right now. 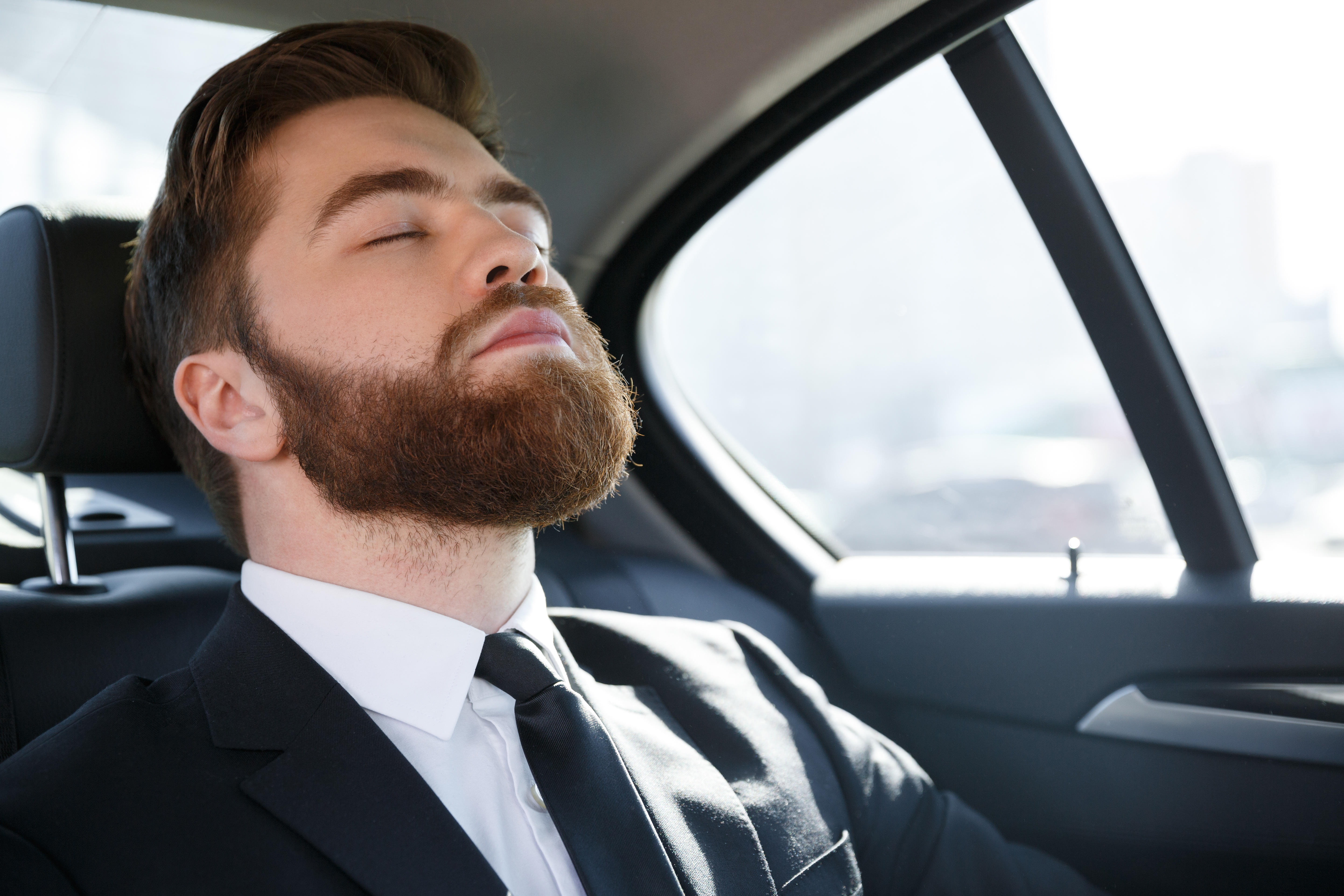