Why Monty waddled into first place

Christmas season in the UK starts with the arrival of the marquee retail ads. Every year the large retailers look to outdo each other with advertising campaigns that garner a lot of attention and boost holiday sales.

We wonder what drives the success of some of these ads, so again this year Affectiva teamed with partner TNS in the UK to emotion test 2014 Christmas ads.

John Lewis was the undisputed winner last Christmas in the store wars with “The Bear & the Hare” emerging as Britain’s favorite Christmas ad and the campaign credited with driving the retailer’s most successful Christmas on record. In contrast, 2013 proved a tough Christmas for Tesco, the UK’s largest retailer, with a disappointing ad campaign and poor sales.

The Bear & the Hare – John Lewis

Family through the years – Tesco

This year “Monty the Penguin,” John Lewis’ 2014 campaign, has been crowned the winner. To date it has garnered over 20.7 million views on YouTube alone, and caused a holiday frenzy, with the Monty toy penguin selling out in hours. Why did the Monty ad go viral? What makes this such a successful ad? And how does Monty compare to last year’s “The Bear & the Hare” and this year’s Tesco ad?

HOW WE TESTED THE 2014 CHRISTMAS ADS

With our partner TNS in the UK we used our own Affdex to record the emotional responses to the ads and coupled this with a survey through TNS’s AdEval methodology, a validated approach covering both short-term and long-term campaign effects. Fieldwork was conducted between the 18th and 20th in November 2014, using TNS Omnibus among adults aged 16+. 2014 performance was benchmarked versus 2013 findings.

You can read the TNS report on this study here. In this blog we want to focus on the insights we derived from the emotion reactions Affdex captured. Analyzing our data we can see clearly why Monty waddled into first place.

1. MONTY IS ONE OF THE MOST EMOTIONALLY ENGAGING AD ENDINGS AFFDEX TESTED TO DATE

In our emotion analytics, we look at beginning, middle and end scores and have developed norms around these. A high beginning score shows you are hooking the viewer and a high middle score shows you are engaging the viewer. The ending score is particularly critical. We have shown in several of our validation studies, that a strong ending correlates highly withsales uplift, purchase intent, likeability, and desirability to view again.

So how did Monty’s ending do?

We compared the emotion engagement (defined as a combination of all the expressions observed on the face) of the last 10 seconds of the Monty ad to the last 10 seconds of the 3,449 ads that we have tested with Affdex in the US and UK combined. We found that Monty ranked 5th out of 3,449 in terms of eliciting high emotion engagement; in fact, it ranked no. 1 when we looked at 60 seconds ads we tested in the UK alone. In other words, Monty elicited one of the strongest, most engaging emotions in an ad ending that we’ve observed to date. 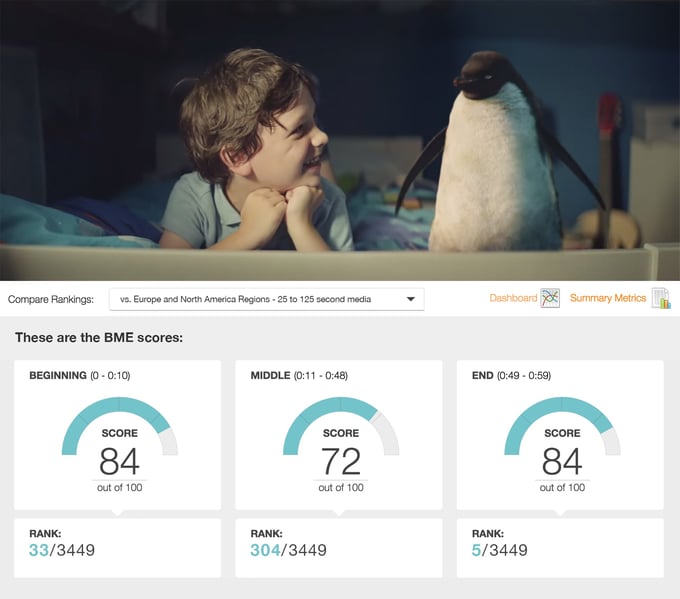 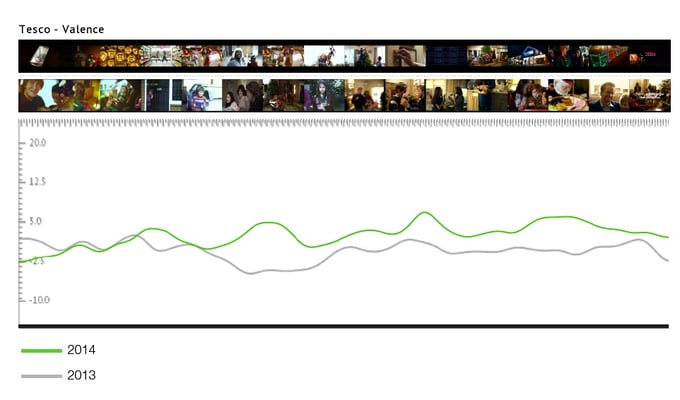 Also, the John Lewis brand reveal at the ending of Monty was very strong. Affdex data shows that the valence curve spikes even more at the end of the ad for folks who have seen the ad “many, many times”, compared to those who see it for the first time. Those repeat viewers who no longer are surprised that Monty turns out to be a cuddly toy, still very much like the ending and we think that has to do with the brand reveal. Perhaps the unique ending was so impactful that it left viewers feeling a strong affinity to the John Lewis brand. 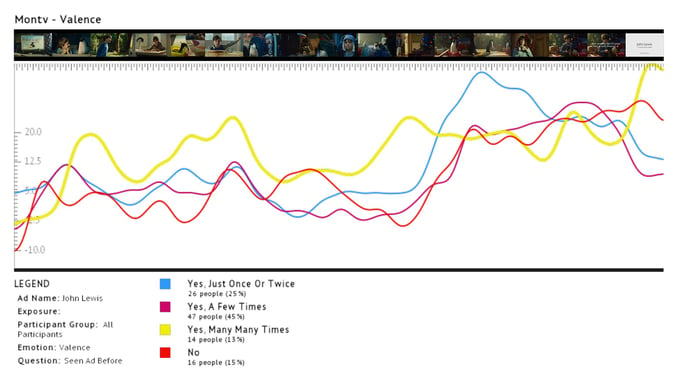 The very strong Monty ending is phenomenal because in our research, we have found that endings really matter – for example an increasing, positive valence (valence is a measure of net positivity) towards the end of an ad correlates highly with sales uplift. Our research on how emotions in advertising drive sales has been nominated for several awards, read morehere. We expect that the Monty campaign will result in a sales uplift for John Lewis – we look forward to seeing the sales data when it comes out.

2. EMOTIONS OF WARMTH AND LOVE.

Marketing magazine UK says “[Monty] tugs on the heartstrings with a heart-warming tale about love and the wonder of Christmas.“

We are often asked whether the face communicates expressions beyond the 6 basic emotions and our answer is consistently yes, it does. Monty is a perfect example of an ad that elicits warmth, love and expressions of “Ohhhhh that is sooo cute”. Affdex was able to very reliably capture the expressions of that emotion on the face.

“Warmth” is an emotion that is not covered as much in the psychology of emotion (or the theory of basic emotions) but is much more popular in advertising research. Its typically defined as a positive, mild, volatile emotion involving physiological arousal, often related to experiencing a love, family, or friendship relationship. In the mid-80s, a seminal paper was published where participants traced out “warmth” continuously (using pen and paper) and a positive correlation was found between warmth and physiological arousal. Warmth was found to significantly correlate with ad liking and purchase intent.

3. MONTY HOOKED THE AUDIENCE FROM THE START

Monty also succeeded at making a positive connection to viewers early on in the ad which we have found to be key to successful ads. Through the large number of Affdex studies we have conducted, we have learned that the Affdex score and Affdex Beginning, Middle, and End (BME) Scores are indicative of audience engagement. We have shown that high enjoyment at the beginning of an ad increases the likelihood that the viewer will watch an ad to the end, instead of skipping it (read more here).

As seen in Figure 5, Monty’s Beginning Score ranks #1 against all other 60 second media tested in the UK showing that the ad immediately captured the audience’s interest, and – as our scores demonstrate – kept the viewer highly engaged through the end. 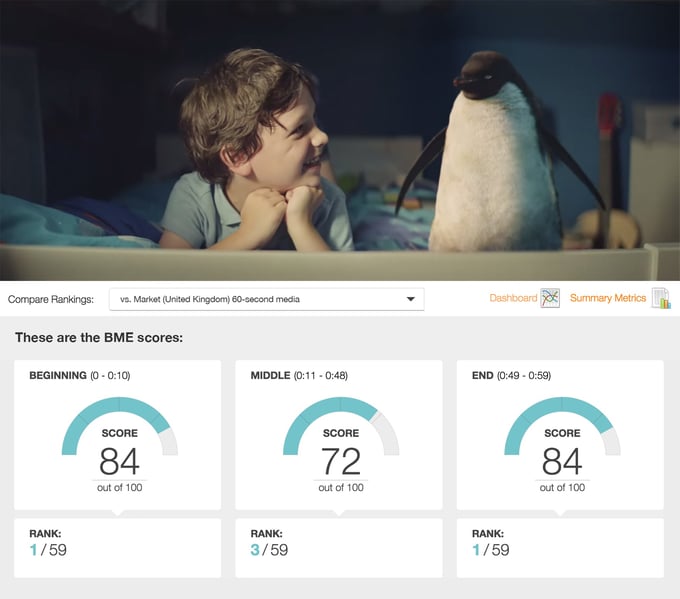 In conclusion, the Affdex data shows that Monty hooked viewers from the start and kept them engaged through the ending with a very warm and ultra cute storyline. None of the other Christmas ads that we have tested in the past several years had this “triumvirate” of hooking opening, warm and engaging storyline and strong ending. This outstanding level of emotional engagement and positivity are what we see as strong correlations to ads that go viral. We believe that this is what caused the holiday frenzy around Monty and made the ad go viral. It will be very interesting to see the John Lewis sales numbers for Christmas 2014. 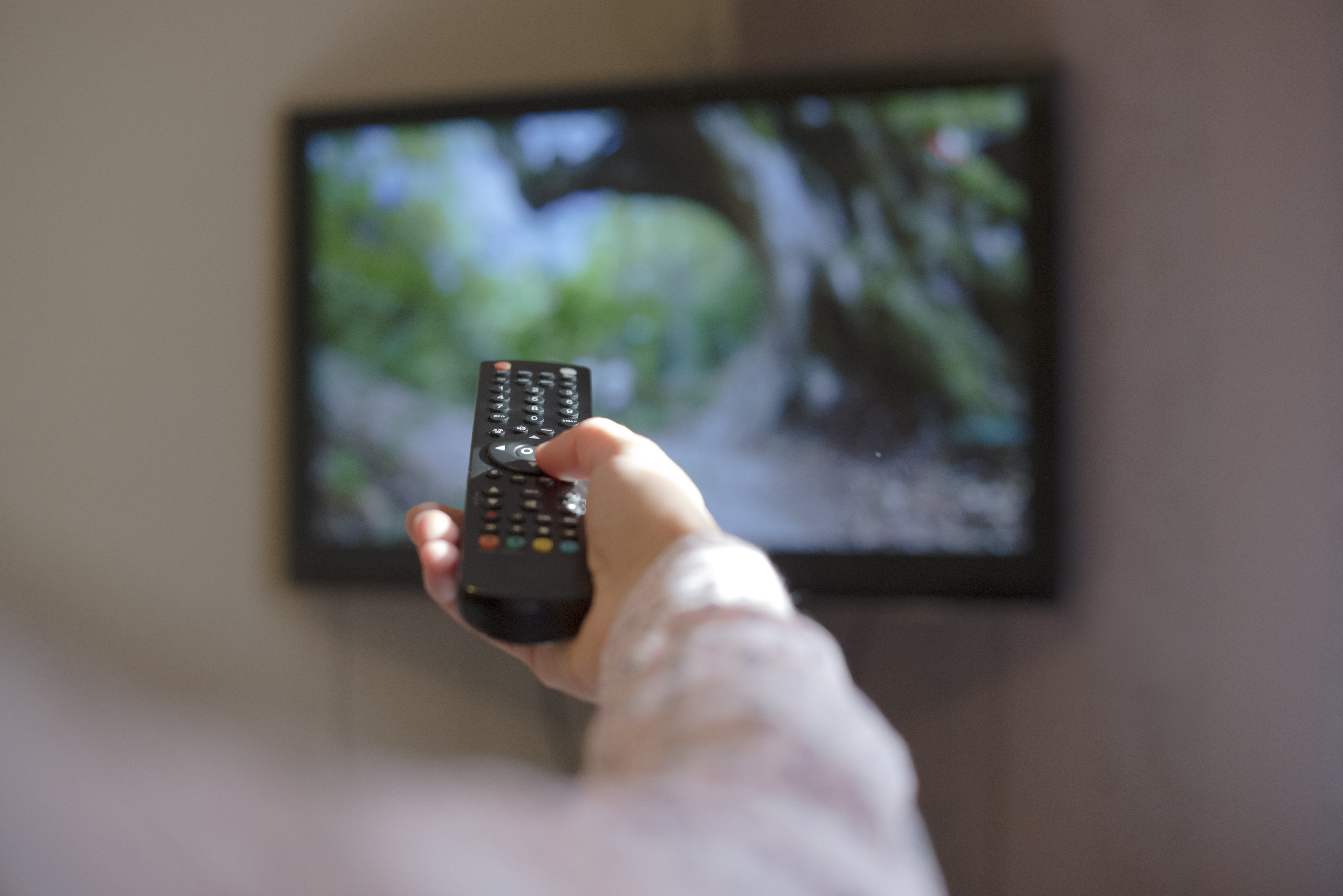 It’s not what you say, but when you say it: The importance of ad break structure in maximizing emotional response