Emotions run high during election seasons. Following a bruising primary season, candidates have little time to prove to potential voters that they best represent their views and aspirations in the general election.

All throughout, the airwaves are flooded with advertisements, especially negative ads. But pundits have called into question the utility of saturating airwaves with TV spots. Even in smaller markets, like Iowa, millions were spent for TV ads by the Ernst (Republican) and Braley (Democrat) campaigns.

SO HOW EFFECTIVE WAS THIS SPEND?

Technology like Affdex can provide political campaigns with a moment-by-moment, fine-grained assessment of subconscious emotion responses to specific messages, as well as an assessment of overall engagement and correlation to virality and voter preference.

By using Affdex to test two representative ads in the Ernst/Braley US Senate race, we set out to discern voters’ emotional reactions to introductory, meet-the-candidate ads (Joni Ernst’s “Squeal”) and classicly negative ads (Bruce Braley’s “Look”). Ernst’s “Squeal” garnered higher emotional engagement with an Affdex Score – a measure of overall emotion engagement – of 73 versus an Affdex Score of 69 for Braley’s “Look”. 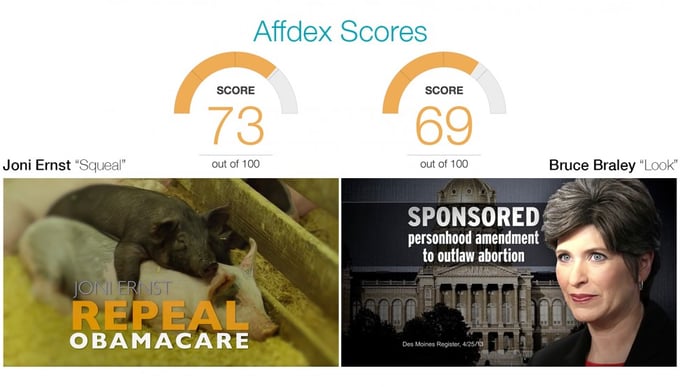 Let’s explore this some more ….

HOW DID WE TEST THE ERNST AND BRALEY ADS?

For the 2014 midterm Iowa US Senate race, working with E-Voter Institute, we interviewed eligible voters in Iowa and, with their permission, captured their facial expressions in response to “Squeal” and “Look” ads. We made sure to select an equal number of Braley and Ernst supporters and asked them to view both ads online. Affdex then reported viewers’ emotional reactions to the ads, such as confusion and surprise. Our results were summarized in an internet radio podcast with Karen Jagoda of E-Voter Institute.

The two ads tested couldn’t differ more. In the now-famous “Squeal” (garnering over 850,000 YouTube hits), Ernst suggests she is prepared to limit government spending and compares Washington to hogs needing–what else?–castration. Oh my! Facing a crowded GOP primary field, it allowed Ernst to break through and eventually win the Republican primary. It’s rumored her campaign spent only $7000 on the spot. Braley’s “Look” aired in early September and took a more traditional, negative approach, criticizing the then-surging Ernst for her vote, as a state senator, to outlaw abortion, painting her as “wrong” and “radical” for Iowa.

1. “Entertaining” viewers is important in political advertising too

Entertainment is an important and pervasive element of television ads. Most ads today have at least one form of content used to entertain the consumer, such as humor, fun stories, or upbeat music. We are beginning to see more of this focus on “entertainment” extend to political advertising too. As shown below, Ernst’s ad garnered high emotion engagement from both the Ernst and Braley supporters. Ernst’s play on her experience with castrating hogs and how she would figuratively apply this thinking to Washington successfully elicited a range of positive and negative emotions from the viewers. 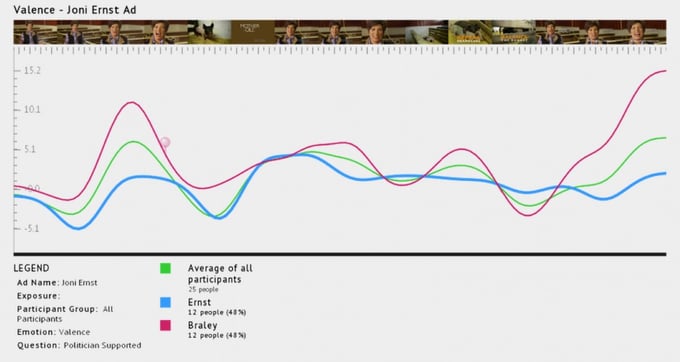 This is especially the case at the beginning and end of the ad (see the traces in the Affdex image above). A strength from the beginning of the Joni Ernst execution was her ability to dramatically hook the audience in the first 10 seconds. She immediately drew viewers in by introducing herself in a unique fashion contrary to typical political ads. Towards the end of the ad, with the reveal of the “squeal” message, supporters of both politicians are highly engaged.

Clearly, Ernst’s “Squeal” ad was entertaining to both Ernst and Braley supporters.

Ernst’s ad showed strong polarization by gender. Men clearly elicited a negative response to the beginning and end, indicating their lack of appreciation for the storyline, whereas women were quite entertained – just look at how these curves diverge in the image below. Neutral is shown as the dotted line. The last few seconds of the ad was especially polarizing, with women responding positively and men responding with negative expressions. 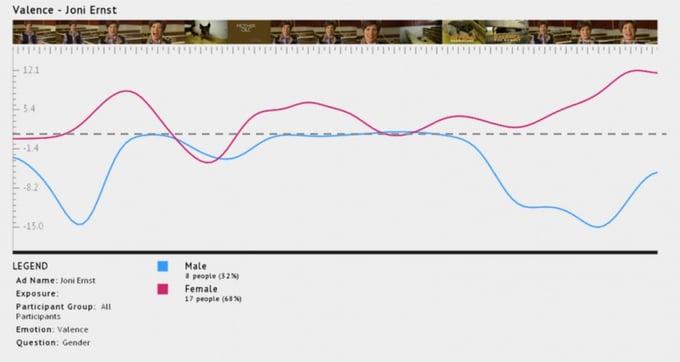 That left us to wonder, was that the intended outcome? Perhaps men winced at the notion of hogs being castrated?

Braley’s “Look” ad also elicited different reactions from men and women, with men reacting much more negative than women overall. Especially at the beginning of the ad where it’s mentioned that Ernst sponsored an amendment to outlaw abortion.

THE FUTURE OF EMOTION ANALYTICS IN POLITICAL ADVERTISING

The Ernst/Braley ad test was a quick and simple study to assess the emotional impact of these ads. We need to stress that the sample size was small and more data is needed for generalizable results. Nonetheless, this study yielded interesting results and certainly raised more questions that would be interesting to investigate in a larger study.

This effort built on earlier work we did in the 2012 Presidential election in conjunction withNew Scientist Magazine where we analyzed the debate performances of Barack Obama and Mitt Romney. In that test, Affdex was able to discern a great deal about viewers’ reactions to candidate messaging, particularly in understandability. In fact, we were able to predict independent voter preferences based on viewer’s facial expressions with an average accuracy of over 73%.

A natural extension of this work is to explore the relationship between emotion responses to political ads and voter preference. We wonder what type of emotion does it take for a political ad to drive interest in (or away from!) a candidate? With an increasing number of negative political ads how negative is too negative…

If you are wondering about these questions as well, and would like to collaborate with us on future research, reach out to us at info@affectiva.com.