Driver Monitoring and the Battle Against Texting

Mobile phones have, for good and bad, embedded themselves in just about every aspect of our lives. We use them to read the news, check our Twitter feeds, make phone calls, send text messages, take pictures, listen to podcasts, and even buy stock.

And if we’re honest, we are very tethered to our phones. A recent study by Asurion found that, on average, Americans check their phones up to 80 times per day (once every twelve minutes). 49% of respondents said that they don’t believe mobile phones are primarily for making phone calls, and 41% said that they would literally always be lost if they didn’t have their phone’s GPS.

These statistics make sense given how central mobile phones have become to so many different areas of our lives. To be without our phones, even for just a short time, feels disorienting.

“Smartphones have become the remote control to our lives, not only storing our contacts, calendars and photos but also serving as the main operating hub for connecting to our smart home devices, our car Bluetooth systems and more. So, when your device is lost, stolen or broken or simply isn’t connecting correctly, it can have an immense impact on your daily life.”

In other words, we use our phones all day every day.

And while mobile phones certainly provide innumerable benefits to us, they also create some unique dangers, particularly when driving. We’ve all witnessed that car swerving on the highway, and pulled up to pass them only to see the driver sending a text. Or while running late, you pull up your phone’s GPS app while driving because the road you always take is closed - because pulling over to do so will eat up more precious minutes you just don’t have. Safe?

Put bluntly, distracted driving related to cell phones is an enormous problem in the United States. 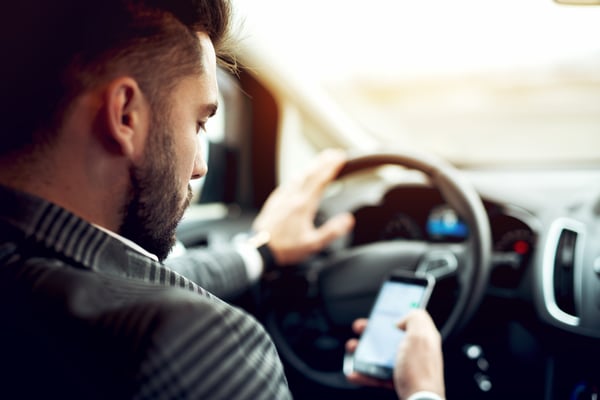 The Danger of Distracted Driving

The National Highway Traffic Association reports that around 481,000 people use mobile phones while driving during daylight hours. This distracted driving has catastrophic consequences, causing 3,450 fatalities in 2016 and 391,000 injuries in 2015. The US Department of Transportation also attributes cell phone use while driving to 1.6 million auto crashes each year - despite texting while driving being banned in 47 states.

And while these statistics are both alarming and heartbreaking, they’re not surprising. If you’re driving at 55mph and take your eyes off the road for five seconds, it’s the same as driving an entire football field with your eyes closed. It’s quite astonishing that more accidents don’t happen.

And while certain states have passed laws that effectively outlaw using mobile phones while driving, the problem isn’t going to go away. Even though we know both the risks and the laws, it’s always going to be a temptation given the hyper-connected world we live in.

In fact, the National Safety Council found that 82% of Americans said they felt the most pressure from their families to use phones while driving.

Bottom line: we all feel the pressure to be connected and available at all times of the day, even when we’re driving.

So what can be done? Are there ways to reduce distracted driving other than physically locking mobile phones in the glove compartment?

The Power of Driver Monitoring Systems

Distracted driving has become such a ubiquitous danger that regulatory and safety bodies are taking notice. Organizations such as Euro NCAP, a European car safety performance assessment program, are leading the way and want Driver Monitoring Systems that recognize impaired states such as distraction as a primary safety standard by 2020.

This has enormous potential to reduce accidents caused by distraction. Imagine these scenarios:

These are but only a few of the thousands of possible scenarios in which driver monitoring systems could recognize distraction and make your experience safer.

Winning The War Against Distraction

Unfortunately, human error and distraction will never be eliminated. We are, after all, human. However, by using artificial intelligence, we can significantly cut down on driver distraction and error.

It’s not an easy task. We’ve already imported more than 7 million facial videos from 87 countries into the algorithm in order to “teach” it to recognize cognitive states.

But given the enormity of what’s at stake, we believe it’s a worthy task.