What does fake news look like to you, and how do you feel about it? What about credible news - those invaluable outlets that you trust to provide an unbiased window to the world? Do you ever question the legitimacy of the 24-hour news cycle that bombards you all day?

Last week, Affectiva teamed up with our partners at Protobrand and LightSpeed to deliver a webcast around Fake News. The study leveraged our emotion recognition technology for sentiment analysis around high-profile news networks - and tested a variety of networks, from New York Times and FOX to CNN.

We spoke with Kenneth Ott, Research Manager and Analyst at Protobrand, about the study, its methodology, and the insights uncovered. 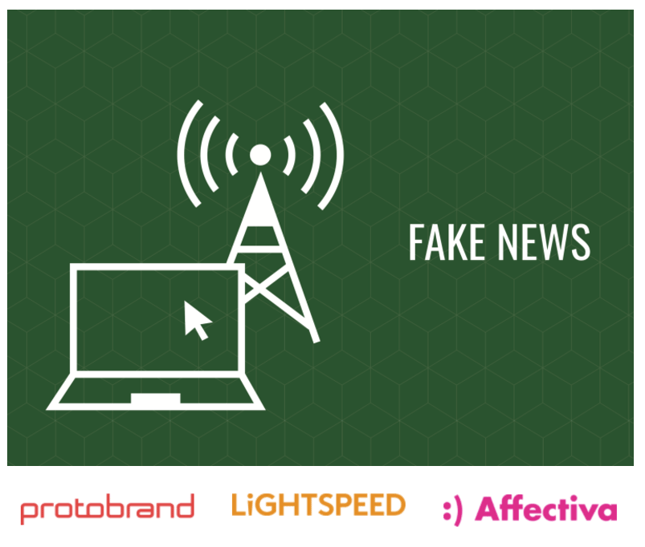 At Protobrand, we do lots of webinars both to keep people updated and to push the boundaries of innovation within market research. We like to tap into hotbed issues and dive into popular brands, to keep the material both entertaining and informative.

As for the topic - well, it’s YUGE. Fake news is such an important issue right now, and we realized that we're not really sure we know what it even means. This is a topic that some say might have impacted the election; is regularly Tweeted about by the President; and questions the legitimacy of the valuable information we rely on every day. We wanted to get a deeper understanding on what fake news really is, how we feel about it, and find the differences between it and credible news.

Three companies came together to make this study a reality. Lightspeed provided the sample of people tested: which was a general population male / female split of 18+ people with 50 percent opting-in for our facial coding exercise.

Then we used the Affectiva SDK for facial coding, or to understand the emotional state of participants as they engaged with our survey questions. We had partnered with them before, but this was something new in the sense that we did not use Affectiva for more traditional coding. We previously only had respondents view a video or static images then with the Affectiva SDK in our platform we recorded salient emotions that we compiled into reports for the study. 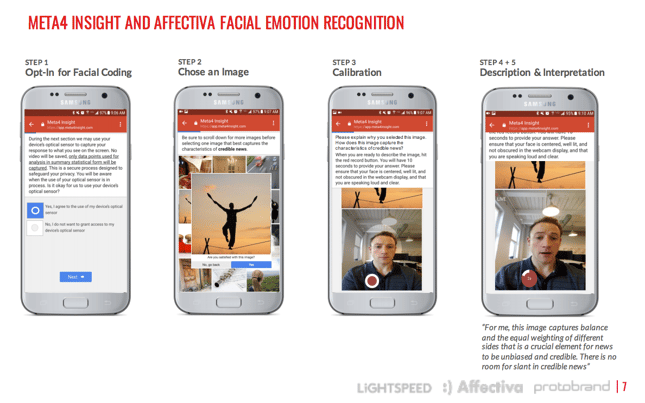 Our methodology leverages metaphor elicitation, a unique technique that enables individuals to better express their thoughts and feelings through the use of visual metaphors. For this study, we were able to implement Affectiva's facial coding while respondents respond verbally to these questions, capturing their emotions as they speak.

We asked participants to select which image best captured their response to a question, then prompted them to interpret and explain why they selected the image image, and from that point we were able to gather valuable data using text analytics paired with Affectiva. We then used speech to text transcription on what people were actually saying. Once that was coded, we correlated the emotional levels with the salient codes uncovered with text analytics.

The Role of Emotion in Fake News

Emotion drives everything we do. The decision we make on a day-to-day basis are not always made with the rational, cognitive brain, but more often driven by deep-seated emotion that can be difficult to identify. We're identifying which of these emotions are prevalent in the context of fake news, and how they relate to the way we think about fake news. Rational thought still has a role in our perception of fake news, but the underlying emotions we uncover with Meta4 Insight and Affectiva's emotion recognition technology really drove this research.

Keep in mind, when we look at fake news, always should be thinking regardless of where we are leaning - is it fake news, or is it news that we don’t agree with? The two can be mistaken for the same, and we confuse expected truth to dishonesty of news.

When we hear “fake news,” fake means not truthful, or made up - not the definition of real news. In fact, it’s the exact opposite of credible news. This perception and understanding of fake news is universal, and bridges the bipartisan gap. However, both individuals on the left and the right label news sources that lean the other way as "fake," and are more likely to assume the news they know and like the slant of to be "credible." It's not so much about "real" and "fake" as we once thought.

Conduct Your Own Study: About Protobrand & Meta4

Protobrand is a technology-powered market research and branding consultancy committed to advancing how the world uncovers human truths. Through our proprietary survey software, Meta4 Insight®, we rejuvenate traditional quantitative research with deep-seated System 1 insights. We work with leading global brands across industries to uncover decisive insights that propel brands to unparalleled success.